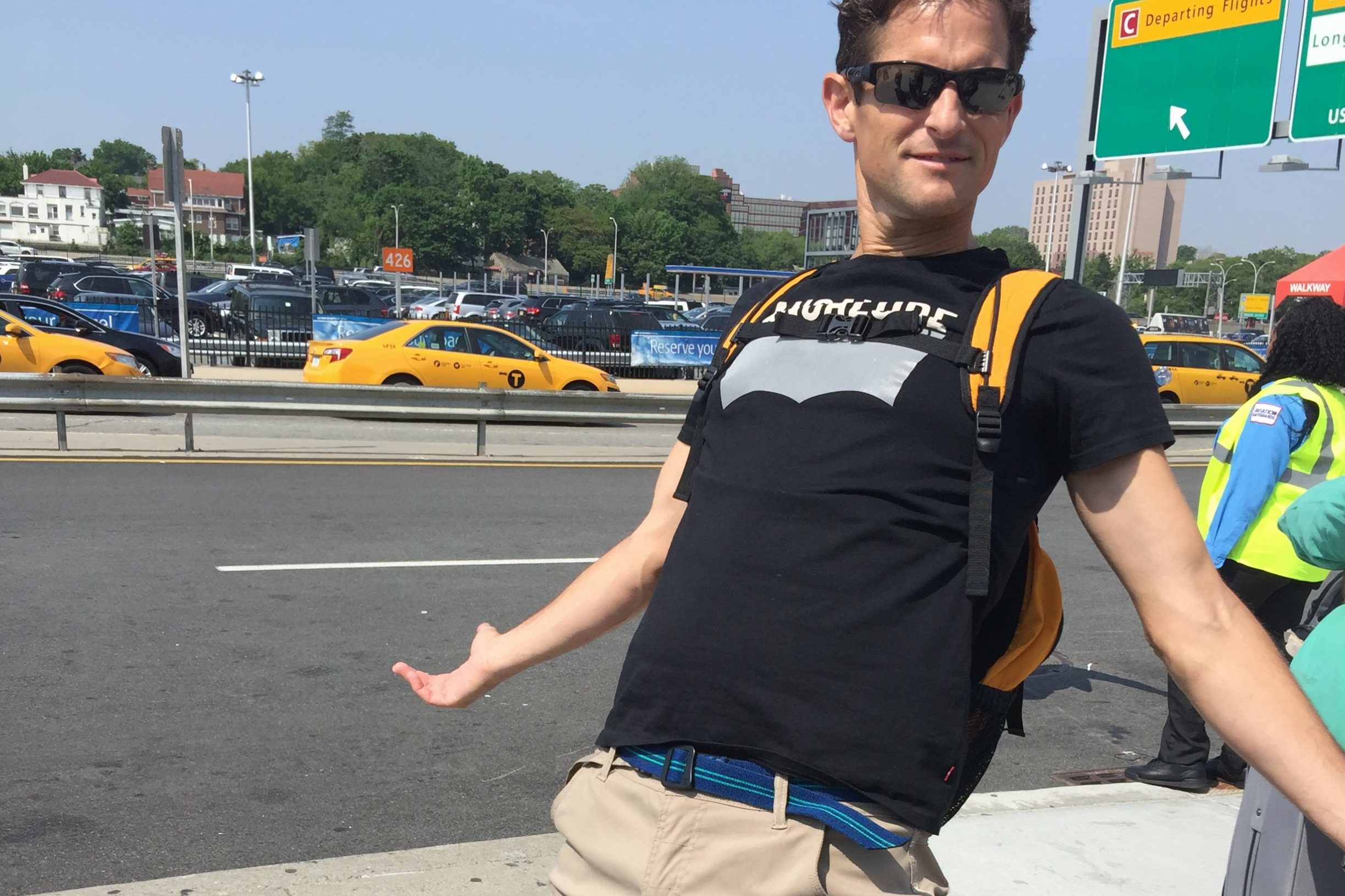 Something happens to my husband when we go on vacation. He turns into what we refer to as, Vacation Daddy. The normally sensible guy who makes everyone in the family insane with his calculated overthinking on everything from how much toilet paper should be used, to the exact dollar amount needed for comfortable retirement is gone, and in his place is this fun guy who’s passing out Sour Patch Kids, cranking the tunes, and saying yes to everything. Who is this guy? 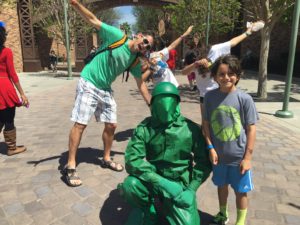 Vacation Daddy is real. A phenomenon I’m only beginning to fully understand after sixteen years. I’m not entirely sure what happens. The night before vacation he’s Regular Daddy, inspecting bags to be sure everyone has packed sensibly, turning on light timers, and calculating the exact time we need to leave the house to make it through security and be the first ones on the plane…this is key, I’m told, for prime overhead baggage availability. Even through security, he’s still Regular Daddy, the model of efficiency, moving us through with no-nonsense seriousness like we are the Von Trapps escaping the Nazis. Once we get to the gate? He’s like a one man freakin’ party. He’s pointing and snapping playfully at the kids going, “Who wants a smoothie?”

As if you don’t know, smoothies at the airport are about a million dollars. The only thing more expensive is a Fiji water. If you skip buying airport beverages you could probably buy some village that well they’ve been saving up for. But none of that computes to Vacation Daddy. He’s out of his goddamn mind, drunk on the combination of being sprung from the fluorescent lights of work and wearing shorts. God love him.

All you can do is get behind his Clark Kent to Superman transformation and marvel at the wonder that is Vacation Daddy. Because it is a wonder. Who is this guy dropping 50 bucks at Starbucks like a rock star when you’ve seen him interrogate your child over a $9.99 3-pack of socks at Target. “What’s wrong with the socks you have?” He asks defiantly. After they’ve proved their feet have grown and all their socks have holes in them via a short slideshow they put together on an app that doesn’t exist, but should, called, “Prove it to Daddy,” he consents with an obligatory, “Money doesn’t grow on trees.” Well, except on vacation in Starbucks, when Mr. Fun waves his app around like he’s a VIP at a strip club and he’s going to make it rain Venti Lattes.

By no fault of their own, Dads, by a mysterious process of being male, having children, and growing older, unwittingly become the incarnation of conservation. I’m convinced the Y chromosome exclusively carries the “who left the lights on” gene. They aren’t cheap, that’s not it. They just become minimalists about everything. Like packing. The guy packs one pair of shorts and never a long sleeve shirt, which sounds great until an hour into the drive when he spills mustard on his shorts and shivers in the sub-zero temps of the Cracker Barrel. Still, they insist everyone should adopt their minimalist thinking. Oddly, this strategy doesn’t translate well to our teenager daughters, who look at him like he’s crazy when he suggests they only need two pairs of shoes. But there’s no telling him otherwise. The guy truly thinks less is more, well, unless it’s mulch. Apparently, there is no limit to the amount of mulch one can have. 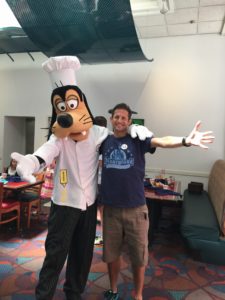 More than anything, though, Regular Daddy likes to think things through. Take purchases slowly. Ask questions. Maybe make a soul crushing pro/con list. They make smart, economical decisions. There’s nothing spontaneous about Regular Daddy. I’ve seen him interrogate a kid about their t-shirt inventory before pulling the trigger on a $7.99 one at Old Navy. Yet, this same man on vacation will buy $45 t-shirts at Disney World like it’s nothing…and he’d shoot them out of an air cannon if they’d let him. Vacation Daddy is out of his mind!

And it doesn’t matter where we go. Overpriced concert t-shirts? One for everyone! You want to start collecting pins at Disney Word? Here’s a lanyard and small bank loan to get you started. Shark tooth necklace? Even though you’ve got three at home? Vacation Daddy says, hell yes. Bottle of sand? Done. Snow globe? You bet. Sporting event souvenir cups? Yup. “Mere, they’re refillable.” I hate souvenir cups more than I can say. You’re cold at the beach because you forgot a sweatshirt? You won’t get a lecture. Not from Vacation Daddy. You’ll get new sweatshirt. If you can silkscreen it, he will buy it. It’s like he thinks money isn’t real on vacation. They guy who will look for a five-dollar off coupon before a tire rotation, is pissing away hondos on slushies, cotton candy, and soft pretzels.

Don’t get me wrong. We love Vacation Daddy. He’s the best ever. But sometimes we get concerned. Like did he lose his job? Find out he has a week to live? Are these the beginning signs of dementia? We are cautious at first, feeling him out to see if it’s a set up. And, I’m not really Vacation Mommy. At home I’m good cop to his interrogating, so on vacation I’m the one trying to reel in the madness. I suggest sharing smoothies and letting them each pick one souvenir at the end of the week. But he’ll have none of it. And the kids, always shrewd for their own interests, defect to him immediately and leave me for dead. 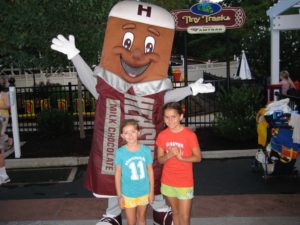 Once at Hershey Park the kids wanted stuffed animals in the shapes of Hershey chocolates. No offense to the good people of Hershey, but these stuffed animals sucked. They were like a step up from sad carnival prizes for shooting water in a frog’s mouth. I put my foot down. Not only do I hate stuffed animals, I’d been a parent long enough to know that they are loved on average for twelve hours and then forgotten, left languishing for all eternity in a dusty corner creating a lair for spiders and mites. We already had a house full of unwanted, dejected stuffed animals that had good reason to be as much of a dick as that stuffed bear in Toy Story 3. No more, I said.

We went home with two Hershey’s Chocolate Bar Men and one Reese Peanut Butter Dude. “They’re only young once, Mere.” There is no reasoning with Vacation Daddy. He will win every time. I have a drawer full of souvenir cups to prove it.

As fast as Vacation Daddy appears, he disappears just as quickly. Usually during the final leg of whatever means of transportation our trip calls for. You so much as ask him for a bottle of water in the airport on the way home, that smoothie tossing, fun loving guy will ask you if you have a job. You want snacks on the road trip home? He’ll dig out a bag of crushed pretzels and tell you how expensive college is. Forget jamming out to tunes, he’s back to listening to NPR and grumbling about the state of the world. And I dare you to ask him to stop at Starbucks.

Regular Daddy is back, moments away from bankruptcy, with seemingly no memory of Vacation Daddy, as if he was in a black out the entire time. And don’t bring it up, because he will deny it. But, next time he grills you about why you need new sneakers, just remember, next family trip…cake pops for everyone! Until then, I hope you like mulch.