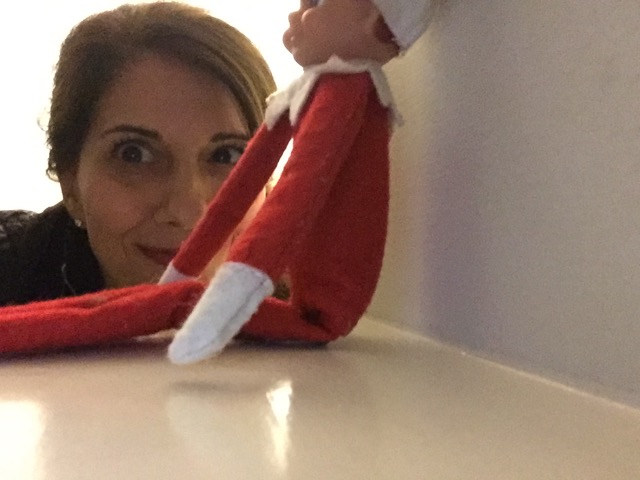 Anyone who knows me knows that I’m a prime candidate to hate this ridiculous Elf on a Shelf tradition. For starters, I’m lazy AF. I am. One of my worst character traits. I try to imagine that in a past life it was my very laziness that saved me. Like all the cave people went out to check something out and I stayed back and, low and behold, they were all eaten by a triceratops. I also don’t have a great grasp of any kind of world history timeline or any knowledge of what triceratopes eat. Are they the big ones with the tiny arms? Never mind. I don’t care.

Anyway, I think I was mentioning being lazy. It’s true. For me to willingly take on an unnecessary activity like, I dunno, moving an inanimate object around my house so that my kids think it magically flew in from the North Pole each night, I’d have to alter my entire personality, which sounds almost as exhausting as moving the damn elf to begin with. But I do. I move the elf.

Still, I read all the funny blogs by the cool parents who would never, ever do this stupid thing and I think, hell yes! Until I remember that I do this stupid thing. And what’s worse? I don’t hate it. Who am I? What have I become? It’s a goddamn identity crisis for me.

For ye olde record, I’m not clinically insane or anything, well, at least in regards to the elf. I don’t have some bulletin board of faded newspaper clippings with push pins connected by yarn that I tirelessly study to discover the best ever elf idea for Tommy’s adventures. But I also don’t hate on those parents. Elf creativity is like plastic surgery; it’s a victimless crime. And let’s be real. All parenting really is is an endless series of giving your kids the childhood you never had. Listen up all you anti-Elf parents…your kids are going to embrace this elf thing. You’ll find their elf in the bathroom sink enjoying a mini-marshmallow bubble bath with Barbies, and that’s just the beginning. Yup. It skips a generation.

That’s really all I’m doing with the elf over here. We only got the elf a couple of years ago, when the kids were 13, 11, and 7, to keep the magic of Santa alive for my youngest. As the youngest myself, I’m well aware of the fate of last kid and holiday myths…they get destroyed, one by one, by insensitive siblings and lazy parents, and it sucks, or as my youngest would correct me, “stinks.” Yeah, he’s also the bad word police with his work cut out for him over here.

Let me be clear. There was no way I could have added this layer of hell to my life when I was still bathing and dressing my kids. If you are still at the stage where you break into a sweat while sausaging your kid’s chubby, clammy legs into tights, I do not recommend introducing this nonsense to your life. It will shred your last nerve and you will inadvertently become a holiday wine-o-holic, which is a thing, or so I’ve heard.

By the time we succumbed to the elf, we knew the rookie parenting pitfalls. Once I made the mistake of answering a letter to the Tooth Fairy by writing with teeny tiny curvy script in a spiral and signing it with a name I’d never remember. Nineteen teeth later, I lived to regret that. This time we would do it right.

First, we didn’t make our elf into some kind of creepy Big Brother spy, nark asshole. Not only am I not on board with that entire concept of behavior modification, but I’m pretty sure it raises sociopaths or psychopaths. Again, I’m too lazy to learn the difference. But, one minute everything is fine and the next, your kid is humming Christmas carols and whittling a candy cane into a shiv.

We keep things with Tommy simple. He’s like an old-fashioned, beta elf. He pretty much moves from one boring spot to the next. We don’t overthink it because that’s where the trouble starts. Once you raise expectations, you will paint yourself into an Elf on the Shelf corner that will tear apart the very fabric of your sanity and test the limits of your marriage. I speak from experience.

You see, I fell victim to the elf pressure. George was sullenly telling me about how his friends’ elves did cool stuff, so that night I innocently put a few of his Mario Cart cars around the elf. When my husband saw it the next morning, he said nothing, but that night, he let me have it. His concerns were valid, well, for a fight about a magical elf, anyway. How could I? Now what?

I tried to counter with how reasonable what I did was compared to what was out there. He was having none of it. So, I did what any mostly wrong person in a fight about a flying elf would do, I laughed. It was funny, right? A high-octane fight about an inanimate object we are pretending comes to life to stage races in the middle of the night has to be a new low for married people. I could see the courtroom, the suit-clad divorce lawyers, Dan sitting behind that table looking bereft it’s come to this, me on the witness stand wearing a pink sweater set from Talbots, nervously fingering my strand of pearls.

“Yes, your honor. It’s true. I set up an Elf on a Shelf adventure drag race with Yoshi, Bowser, and Princess Peach. And I’d do it again.”

Well, I’m happy to report we avoided legal action and had a good laugh about the madness of parenting, the holidays, and the freakin’ Elf on the Shelf. But this elf is only one of many polarizing things about parenting. One of the camps you have to choose. Team Elf? Or Team Hell No Elf? Like most parenting battles, I find myself somewhere in between. I relate to the Hell No Elf people, and I know deep down I’m really one of them. But, I’m also this mush of a mom with a ten year old who loves this silly tradition of the magical, flying, fabric elf and it’s somehow become for me this last ditch effort to be sure he doesn’t get cheated out of his childhood.

And I like our elf. I feel like Tommy gets me and we commune with our eyes. He says, “Hang in there, M. You’re doing fine.” And I say, “How come you get to hang out all day and no one calls you lazy?”

Post Views: 7,043
← I Wish I Packed My Army Green Pants, A MemoirTeenagers in the Mist →

"In (Mild) Defense of the Elf on the Shelf": https://www.mblazoned.com/in-mild-defense-of-the-elf-on-the-shelf/