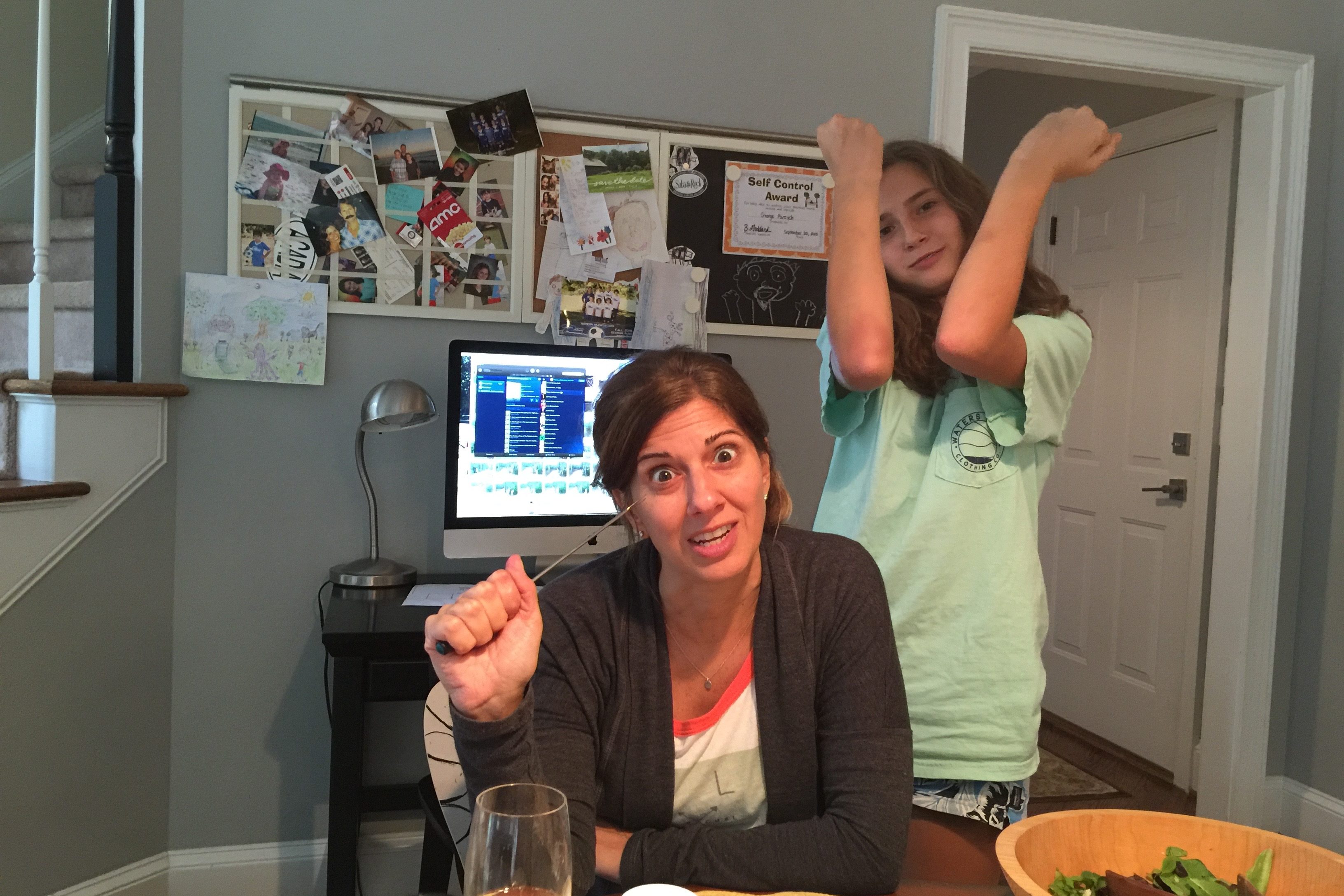 I have never liked horror movies. It was one and done for me. I still can’t even think about the Exorcist without covering my ears and saying, “La, la, la, la, la.” But lately, I’ve been longing for something as simple as a demon-possessed child with a spinning head. A creepy clown offering kids a balloon seems almost charming. Bring on the adorable guts and gore of a masked chainsaw wielding homicidal maniac. What’s making me lose sleep these days is how television and movies think a family dinner goes down.

Do you even know what I’m talking about?

Okay, for those who aren’t already seeing this for the horror show it is, let me get you up to speed. I’m about to describe a recent display of this so-called family dinner I saw on TV. If you are prone to nightmares, or perhaps have a streak going where you haven’t thrown up for a decade and don’t want to end it, fair warning. It’s pretty graphic.

The scenario of the family dinner is in a dining room on a weekday night. Already, it is frightening as all hell, right? Who eats family dinner on a weekday night…in the dining room? Serial killers, that’s who. But for some reason, on like a Tuesday night, there’s a fully set dining table, with linens. Linens!! Now, and sorry to be so blunt, but all the children and the husband are seated comfortably around the table. Just sitting. Doing nothing. Waiting for their dinner to magically appear in front of them. What madness is this?

And then, and this is not for the weak of heart, the mother, who has been busily preparing the meal, putting it into serving pieces (??), serves the seated children and husband. No one is asked to help. No one seems surprised by this servant-like behavior. In fact, there’s a fair amount of eye rolling about what a stupid, annoying cow the mom is. Well, mostly by the teenage daughter, because if you’re going for the gender stereotypes, why not go all in, right?

Look. All I’m saying is, where is Freddy Krueger when you need him to lighten things up with some honest-to-goodness face slashing?

I keep seeing this depiction of the family dinner everywhere and it’s freaking me the hell out. I should point out the shows I’m referring to don’t take place in the 1950s. They are not some dystopian thrillers where future mothers are robots programmed for male domestic and sexual satisfaction. (You wish, weird dudes!) Nope. These are current shows on Netflix tackling issues of autism and what drives teenage girls to commit suicide. Yup. 13 Reasons Why is guilty of it. The juxtaposition of delving into some pretty damned nuanced gender bullying issues and then having the high-powered lawyer mom go full-on Donna Reed, serving her seated husband and son dinner, is terrifying.

Will someone please invite me to a lakeside house on Halloween and ask me to go investigate the noise in the basement by myself? I like my odds of survival as a woman more in that scenario than in this universe where this fantastical narrative of female as willing amiable domestic servant reigns unchallenged…nah, worse…unnoticed.

And can we talk about what a complete fantasy it is from beginning to end? For starters, getting everyone home at the same time once your kids are past about ten years old is a rarity. And in the dining room? With linens? Mom serving like a well-trained geisha? Umm, no. In my house, it would be far more realistic that a doll named Chucky came to life and stabbed us all to death than my kids and husband sitting at a table waiting for me to serve them dinner. Because here’s a crazy concept…since we all eat, we all help. Every age. Every gender. Every career path.

I honestly don’t know a single friend who waits on her seated family. Yet, somehow this family dinner alternative reality is everywhere. TV, movies, commercials. It’s always some young, chipper mom dressed adorably presenting her family with a casserole she looks madly in love with. Funny, it doesn’t resonate with me. The patriarchy is not strong enough to make me fall in love with a casserole. No offense to casseroles. Maybe it’s because Hollywood movie studio heads are 100% male and TV heads are at 71% male. Even still…this is how they think modern families do dinner? Well, in fairness, if they go by their reality they would have the male parent whip his dick out…because they do think it’s 1950 or a dystopian fantasy where that’s super cool and women love it.

I’ve got to tell you, Stephen King has nothing on these writers and directors for scaring the living crap out of me.

In all seriousness, one of the most shocking things about growing up female for me has been this notion that my gender comes with some mystical power that makes me want to cook and clean and shop for others. Ha! I don’t even want to cook and clean and shop for my damn self. Of course, I do it because I eat and stuff, and exist in a family, and I’m team player. But I got zero of the magical fairy dust society seems to think is laced into my estrogen that makes me into some joyful family servant. To quote a dear friend when she was exasperated by the mess her kids made and left behind for her, “I’m not the fucking maid.” Amen, sistah.

The truth is, the message of women as the default domestic caretaker is so constant and ingrained in our psyches we hardly notice it. When I point it out I hear all kinds of warped rationale for how this is fine, tradition, what’s the big deal, M? Call me crazy, (you wouldn’t be the first), but I’m 100% out on any and all “traditions” that color me subservient. And I’m not waiting on anyone unless they tip me. What did Flo say on Mel’s Diner? “Kiss my grits.” That.

I don’t know how to solve this constant subversive message that somehow domestic responsibilities are inherently female, but I am thinking of making a horror movie parody about it. It opens with the mother/spouse/geisha-like character serving the family dinner in the dining room to her seated family when Freddy Krueger, Chucky and Pennywise come in to do some good old-fashioned murdering. But, plot twist, they are too disturbed by what they are seeing, lose their taste for blood, and launch into an enlightened diatribe about the gender politics of parenting before whisking the mom away from her doomed fate.

Yes, Pennywise, I would like a balloon. Now, where is this equal opportunity sewer you speak of?