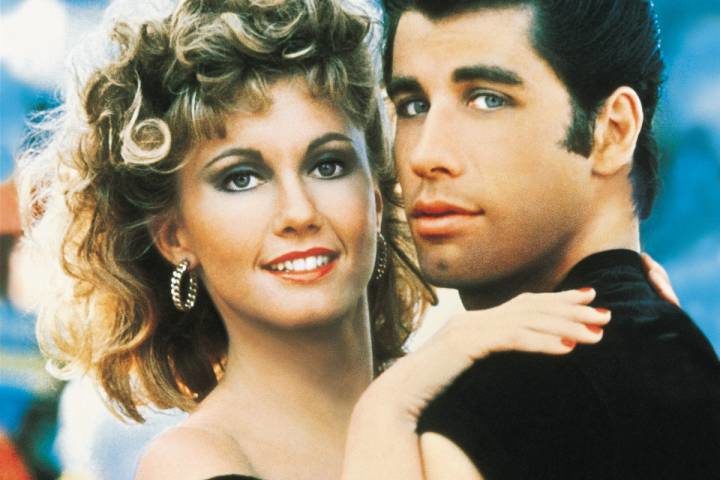 Showing your kids the movies you grew up with. What could go wrong?

After what seems like million years of watching movies with your kids about animated princesses, cars and talking toys, one magical day they are old enough, or so you think, to see the movies you watched as a kid. There’s nothing quite like making this leap with your tweens and teens into the brave new world of the coming of age cinematic magic you loved growing up. Until you do and you are like…Wait? What just happened?

Grease
For some reason it all starts with Grease. It’s a rainy day and you decide your kids are roughly the same age as you were when you saw Grease, so you pop it into the DVD player ready for some good clean family fun. Not so fast, Kenickie. You quickly learn that Grease is not the word at all. The word is sex. The entire movie is really about getting some. From Danny trying to score with Sandy, to Marty’s weird fascination with bagging older dudes, to Rizzo’s pregnancy scare, about half way through you realize that your parents had zero filter. I saw Grease when I was eight. Eight. So, no wonder I spent the majority of my adolescent years trying to morph myself into someone the boy I liked wanted. Is there any worse lesson you can teach a young girl than Sandy at the carnival? “Tell me about it, stud.” Ah, no. But dammit to hell if you don’t set it to “You Better Shape Up” and suddenly I’ve lost all sense of my inner feminist and I’m singing along, longing for a cigarette, a slutty outfit and some red stiletto heels. 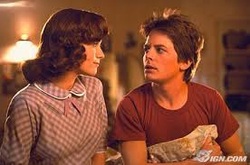 Back to the Future
The kids got a little older we were so excited to show them Back to the Future, the perfect family movie….or is it? It starts out okay, but as soon as Michael J. Fox lands in the past and his mom starts hitting on him, it gets uncomfortable quick. She is totally oversexed and wants her son in his undies, and fast. The incest portion of this movie completely escaped me as a kid, so I was hoping my kids wouldn’t notice. No such luck.  They are so much savvier than we were. “Isn’t that her son?” “That’s creepy.” “Yeah…I don’t really remember that,” I say lamely. We quickly move past the mom wanting to screw her future son’s brains out and I think we are safe. Until. Dun, dun, dun…we are treated to one of the earliest date rape scenes ever filmed when Biff is literally very close to raping the mom before the dance. I remember going, “Lalalalalalalala” and doing a small soft shoe number to distract my wide-eyed children from the horrors of this sweet gem…all rated PG, by the way. And yet, almost incest and rape aside, it’s family movie gold, right? Did I just say that?

E.T.
Don’t even get me started on E.T. The movie that enchanted my entire generation repelled my children. They completely freaked out when E.T. was creeping out of the woods eating the trail of Reese Pieces. They acted if I had showed them The Exorcist. They refused to watch it. They rejected E. freakin’ T. For the record, because I assume someone is keeping one, when they come back from college and lament their awful childhood of being deprived of seeing the classic movies, I’m not going down without a fight. I basically wrote this blog to have proof that they have no one to blame but themselves.

My Cousin Vinny
When they get a little older, you really start to lose all sense of what is appropriate or, maybe more honestly, decide you don’t care. It’s your Saturday night too, dammit, and you want to watch something you like. I suggested My Cousin Vinny, one of my all time favorites. I could have sworn it was rated PG-13. Sworn being the optimal word. The first 100 words spoken are basically all f*ck. I tried to react with enough horror to make me look like a responsible parent, but they weren’t having it. When I suggested we turn it off they rolled their eyes in eerie precision and called me out on having said the f-word maybe once or twice. And they say teenagers don’t listen. At least they are paying attention. That’s something, right? 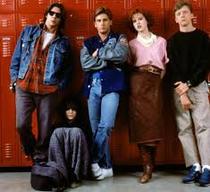 The Breakfast Club
Next up? The Breakfast Club. The pièce de résistance of teen angst movies. I remembered this as a heart-warming tale of kids from different high school cliques finding common ground and acceptance of each other during a Saturday detention. They learn life lessons as they team up against the pathetic Barry Manilow wardrobe raiding, don’t mess with the bulls you’ll get the horns, principal. And that all happens…but with like drugs and bullying and peer pressure. “Are you a virgin Claire?” “Just answer the question.” “Have you ever done it with a guy?” There’s some talk of suicide, bringing a gun to school, nymphomania, child abuse, and an awesome pot smoking scene that would make the Church Lady want to get a little high. And the bonds they formed? They agree they won’t last through the weekend. Once school is in session, all bets are off. Lovely. But still, my kids loved it. I loved it. I teared up when the unmercifully bullied Claire goes to the derelict torturing her and makes out with him. I’m not proud of that. Ah, the romance of high school honestly told by the genius of John Hughes. 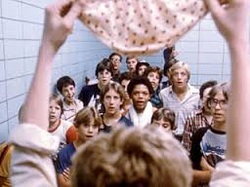 Sixteen Candles
But the greatest day for me was when I showed them my favorite movie of all time, Sixteen Candles. This movie, flawlessly written by John Hughes and his spot on and kinda bizarre understanding of the mind of a sixteen-year old girl, has an endless supply of classic lines. I know this because I know every word by heart, and can execute them with precision timing. I could win a contest. In fact, I wish there was a contest. And yet, I had completely forgotten some of the more risqué parts. Like, Samantha takes a sex quiz in study hall and answers “almost” to if she’s had sex. Of course there’s the Geek borrowing Samantha’s panties to prove he did her. And that enchanting part when Jake hands off his blacked out girlfriend to The Geek who subsequently gets both a blow job and a birth control pill from the very drunk prom queen in a Rolls Royce. True story. But that’s the brilliance of John Hughes…it all seems like a magical fairytale of high school in the 80s. And none of it matters once the Thompson Twins genius riff gently wafts across the screen, revealing the most iconic and dreamy high school boy ever invented, Jake Ryan. When he waves to the ever unsure of herself, Samantha, the spell is cast. From “Yeah, you” to “Make a wish, Samantha” to “It already came true” I’m blissfully reminded that despite my 44 years, I’m still that sophomore with small boobs dreaming about my own Jake Ryan. I heart Jake Ryan.

Quite an Education
Showing your kids your movies is quite an education, but not for them, for you. None of it gave them any pause, because they aren’t little kids anymore. They are growing up and figuring out who they are…all things they are comfortable with…all things these movies depict with more realism than we’d like to admit. What’s uncomfortable is watching your kids grow up in front of your eyes. But if you set it to a catchy tune and put it a movie with a timeless story, and with Jack Ryan’s grin, it’s somehow the best way to share the experience with them. (I just threw up my fist walking through the football field as “Don’t you Forget About Me” came on.)

"It All Starts with Grease": https://www.mblazoned.com/it-all-starts-with-grease/