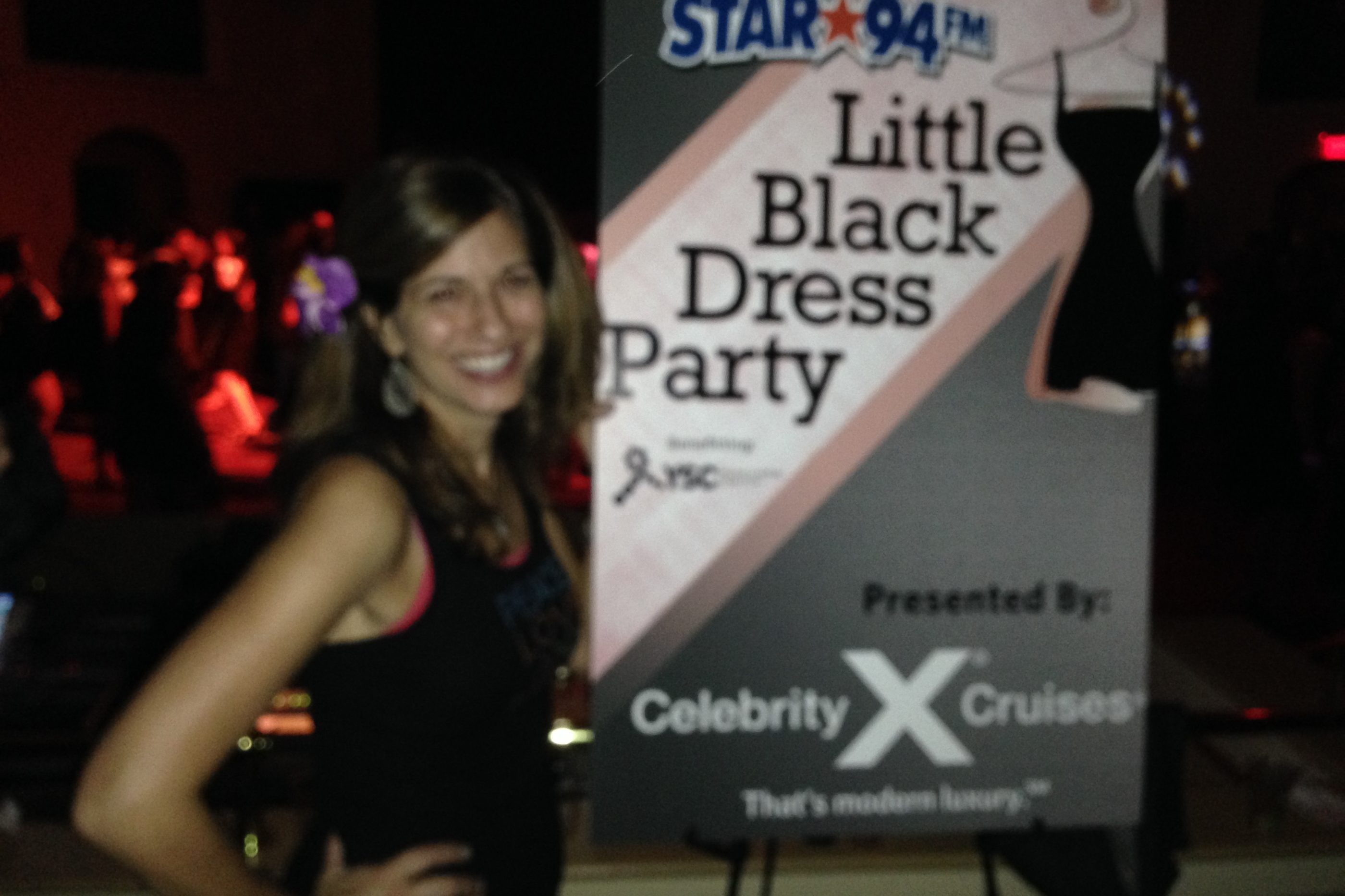 So, my friend invited me to a Better Than Ezra concert. She said something like, “Hey, I won four tickets on the radio to see Better than Ezra, do you and Dan want to go?” Now I’m paraphrasing here, but the important part to understand is that the words “Little, Black, Dress, and/or Party” were never spoken, in any order, at any time. Of course I say yes. I say YES to life! I don’t give a moment’s thought to what I will wear because I’m forty-something and it’s a concert. Right? Wrong. It’s, apparently, a Little Black Dress Party.

I get to my friend’s house and she’s wearing a cute, little, black dress with a fancy necklace and earrings. I’m wearing a denim skirt, a $6.99 tank top from Old Navy that says “Aloha” on it, beach flip flops, and, of course, a flower in my hair. I panic. My husband’s like, you’re fine. It’s a concert. My friend explains that the black dress thing was part of the radio promotion, but she checked and it was optional. She’s a huge Better Than Ezra fan, so I figure it’s some inside fan thing. Neither of us gives it another thought.

We pull into the parking lot and it’s full of women wearing black cocktail dresses. Fancy ones. With pearls. And rhinestones. There is sequins. And heels. High, sexy heels. I’m wearing dirty, beach, Sanuk flip-flops. My toes haven’t been pedicured since about April. I say, “Everyone is wearing a black dress.” My husband was like, “Not everyone is wearing a black dress. You’re just seeing that.” At this point, I realize my husband is either really sweet or completely blind, and I consider knocking out my friend and wearing her black dress.

We walk up to the venue and there is a roped off red carpet and signs everywhere that say, “Little Black Dress Party.” I’m hoping, praying to a god I don’t believe in, that this is some elaborate joke. Or I’m starring in a new reality show called, The Real Housewives of What Not To Wear. I look, desperately, for hidden cameras, or Ashton Kutcher reviving Punked. Come on, Ashton. 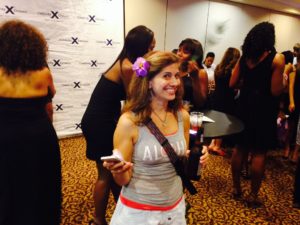 People are staring, whispering, pointing. They aren’t even the slightest bit subtle about it. In fairness to them, I looked ridiculous. I looked like I just rolled off the beach.

I make the most of it. I’m M. Freakin’ Blazoned, dammit. I can hang when the chips are down. I’m so solidly secure with myself, that screw it, I’m happy I don’t have on a little black dress, which incidentally I have lots of cute ones hanging uselessly in my closet 30 miles away. 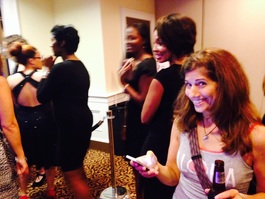 I see the women pulling and tugging on their ill-fitting black dresses…seems many took the “little” part of the invitation too far…and think, I will have the last laugh. Once the concert starts, I’ll be the one dressed to rock out. Right? Wrong. So, so wrong.

Turns out it’s not really a concert. It’s a radio sponsored cocktail party with a DJ and a Little Black Dress theme, I think, maybe, to support breast cancer or some other noble cause I look like I’m mocking. Better than Ezra is scheduled to play for 30 minutes. I’m totally screwed. 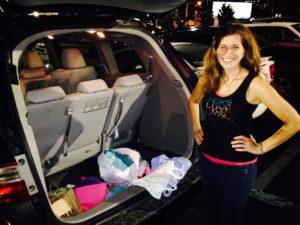 Unable to stand the embarrassment any longer, I remember I have a pair of jeans in the car and two bags of my kids’ clothes for Goodwill in the trunk. Like the classy woman I am, I shimmy into the jeans in the front seat of the car in a well-lit parking lot. We’ve all been there and know it’s not easy. You’re welcome for the visual. I dig out my 12 year old daughter’s dance tank top. It’s black with bedazzled, “Peace Love Dance” on it. Sold! I even have a nicer pair of jeweled flip-flops in my car. Believe it or not, this is a major improvement to my look. I idiotically think I’ll blend in.

Now, I like to sell myself as the type of woman that wouldn’t really care about any of this…and happily a huge part of me did not. I knew, if nothing else, it would be a kick-ass story. But, I won’t lie. It was hard. I wanted a little, black dress so bad it hurt. The Meredith Myth was busted.

It reminded me, oddly, of my 8th grade English teacher who, maybe on the first day of school, for some crazy reason, told us, while slamming of her hand on our desks, that you weren’t really a “virgin” if no one had ever asked you to have sex. (Stay with me here.) At the time, I’m not even sure I knew what a virgin was, and figured she was having a nervous breakdown. But later in life, I got it. It’s super easy to define who you are without ever being in a particular situation. Well, I’m not a virgin anymore. I’ve been tested. I’ve gone to the belly of the beast. I’ve been shaken to the core of not fitting in, of people judging me, and I’m here to say…it’s not fun. Forget character building and individuality. Would someone, please, for the love of god, get me a little, goddamn, black dress?

You might be wondering if I will ever speak to my friend again. I’m going to say yes, since she will read this blog. I’m kidding. She really had no idea everyone would be in black dresses and felt terrible as we all realized the truth of the situation. And she cheered me on in my outfit(s) and thought I was the world’s greatest sport. She’s a super nice person…way nicer than me. But that night I scored some points for being nice myself. And since lately I had been indulging my dark side in a revenge fantasy against someone who totally had it coming, I’ll take nice. 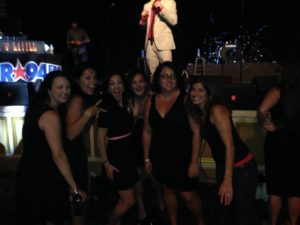 The lesson of the Little Black Dress Party is that you win some, and you lose some in the game of self-discovery. I learned, despite what I want to believe about myself, I’m not impervious to the need to fit in. I also learned that I’m serious about my credo that life is short and you should not take it too seriously. The band played for an hour. They were fantastic. We danced. We had a blast. I have a great story. The women there have a great story about the weirdo who wore not one, but two inappropriate outfits. It was a win for all of us.

But, you can bet your sweet ass that I am going to carry a little black dress in my car, at all times, until the end of time. Might I suggest you do the same. 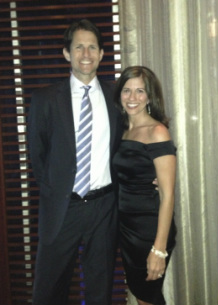 Proof positive I own, and can rock, a Little Black Dress, ya’ll!