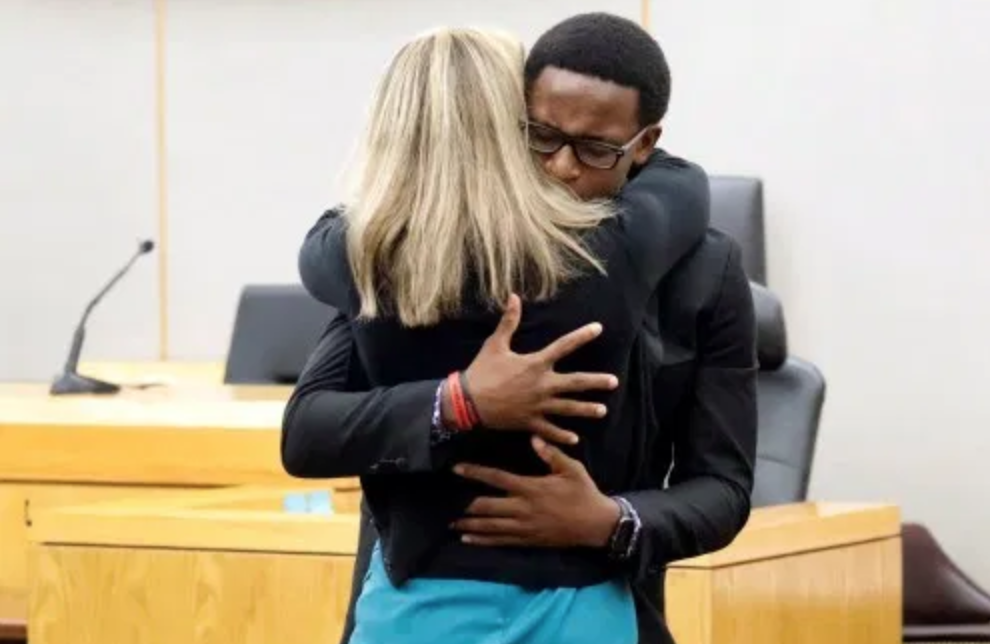 If you’re struggling to understand how this man could forgive and hug his brother’s murderer, you are not alone. Forgiveness, true forgiveness, eludes most of us. Despite it being the cornerstone of many of our religions, still the act of forgiveness bewilders.

Years ago, I struggled deeply with this very issue. I was mired in a negative situation that rocked my very sense of self. I did what most of us do, I dug into my position, uninterested in forgiving anyone. But as I held so tightly to resentment and anger and this toxic idea of being right, I suffered.

Those who I felt had wrong me did not suffer the way that I did. Or if they did, I did not know that or get any kind of relief or satisfaction from that. I just felt this hum of unhappiness in my life because I was holding onto this burden, like it was my job to carry around my own tormenter.

It was under this weight that I turned to books for answers. I learned that forgiveness isn’t about settling anything. It’s not about the glory or victory of finally qualifying who was right and who was wrong. I learned it’s not even about the person you forgive. It’s about you. You do it for yourself.

Forgiveness is as personal as you can get in your human self and life journey. There’s no right way to do it. There’s no perfect time. It can involve the other person or it can take place only in your heart and mind. And there’s no real way to explain to anyone how or why you chose forgiveness.

Other people’s ability to forgive or not is really not meant to be judged or speculated on either. Forgiveness is only between the people involved. Saying you could or couldn’t forgive this woman for killing this man’s brother is a waste of energy. The simple truth is that you don’t get to forgive her. Time is better spent on thinking about who in your life you could forgive, and asking yourself if that would lighten your heart a bit.

I am most certainly not an expert on forgiveness, and anyone who knows me knows that I carry around plenty of unresolved negativity, for sure. But as someone who has definitely hurt people intentionally and unintentionally throughout my life, I am a great lover of forgiveness. I don’t typically have a lot of nice things to say about organized religion, but they did get forgiveness right.

Is it easy to forgive? Nope. But being able to let go of anger and resentment through forgiveness can turn the madness in your heart and mind to peace. I’m amazed by this man, and so many others, who have embraced forgiveness in ways that might always seem mysterious to me.

"The Audacity of Forgiveness": https://www.mblazoned.com/the-audacity-of-forgiveness/