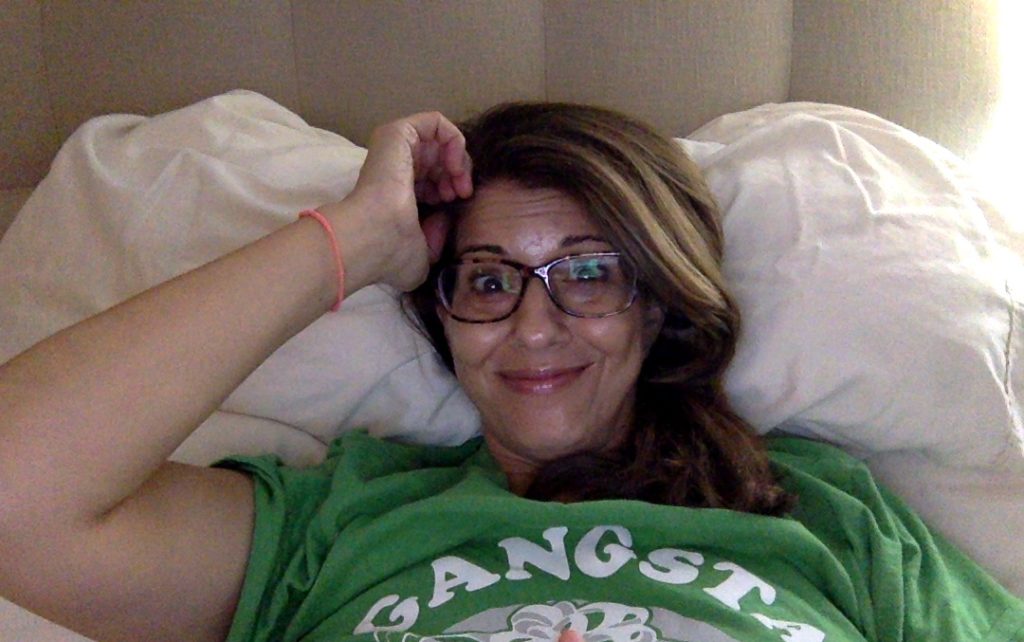 Let me start with, I worked until 7pm. On a Friday night. When I was finished I realized, with all that I did, I never made the presentation I was giving in St. Louis on Monday morning. Great. I’m no longer working for the weekend. I’m working on the weekend.

Then I went to the grocery store. I hate the grocery store. I had to go for two reasons. Dan’s been away for days, rendering us helpless, and I had to pick-up a couple of prescriptions for this brutal cough I’ve had for two week. I’m slow on the uptake to go to the doctor and typically wait until I’m on the edge of being shunned by society for spreading germs. I say, I’m building people’s immune systems. But, whatever.

At the grocery store, I was oddly inspired to buy healthy food and subsequently spent a small fortune. It must be the steroid injection I took in my bum-bum like a real doping athlete earlier at the Urgent Care clinic. I was feeling invincible, you know, not like I could win the Tour de France, but more badass, like that I could survive on healthy food alone.

Don’t worry. I know you’re worried. Once I got to the frozen foods section, I went straight for the ice cream truck like section of delicious frozen delights on a stick. My favorites! I picked out about five boxes of treats under 100 calories per stick. I’m practically a fitness guru.

That is a lie. I picked out four boxes of treats under 100 calories and one box of Häagen-Daz Coffee with chocolate almond hardened dip. 290 calories per stick. Worth it. I blame the steroid shot. This is also a lie. It’s just me.

So, I’m now living, living, I say, for these frozen Häagen-Daz bars. I’m having mini-day dreams about our mutual love for each finally coming to fruition in a forbid dalliance short of way. But they would have to wait.

Since I don’t grocery shop much, I felt the need to reorganize the fridge and freezer. I did that. There was a vacuum involved. It got intense. (Seriously, the steroid injection?)

Then I dutifully made a crap dinner for my kids and we watched an episode of Brooklyn 99 like a bunch of brain-dead futuristic dystopia losers. After I finished the dishes, I vacuumed the kitchen partly because was it was disgusting, and partly because if I drag it out of the closet, I have to get my efforts worth. I rarely make sense. This is a life theme.

It’s about now that I remember I’m sick. And that I’ve been killing myself at work for weeks. It’s my busiest time of year. Blah, blah, “business, business, numbers, numbers…is this working?” Don’t strain yourself. It’s a quote from Lego Movie. Lego Movie I, bitches.

I have to get to bed. I have to. In an hour and half Dan will be home with out firstborn arriving back from her first year of college with a rented minivan full of her crap that will have to be emptied into our garage like thieves in the night to promptly return rented minivan in the wee hours of the morning.

God, I’m tired. I need to chill for a bit. I need an isolation tank, really. Is that still a thing? I conflate them with lobotomies for some reason, so maybe they are both outlawed? I must get to the bottom of this. I will never, though.

I make the decision to change my sheet. Remember, I’ve been coughing for two weeks, like it’s the 1800s and I have whooping cough. I don’t know if that is at all accurate, and I can’t even begin to tell you how little I care.

I enlist the help of my children for the sheet changing, which is comical because I don’t think they have much skill in this area. In fairness the older one does, the younger one is ruined. Ah, forget that parental guilt, he’ll learn how to be great at sheet changing in good time. It’s not rocket science.

Where was I? I’m delirious. I manage to wash up, put on my Retin-A gel under my cream, brush and floss my teeth, because I’m boss like that, get into my pjs, and fall desperately into bed.

It’s then, in this sublime state of supine, that I remember, I never ate my Häagen-Daz bar. Fuckity, fuck, fuck.

The moral of the story is that you should, truly, eat dessert first. And, holy, hell, steroid injections are amazing. I can’t believe I wasted them on this Friday night in Meradise.