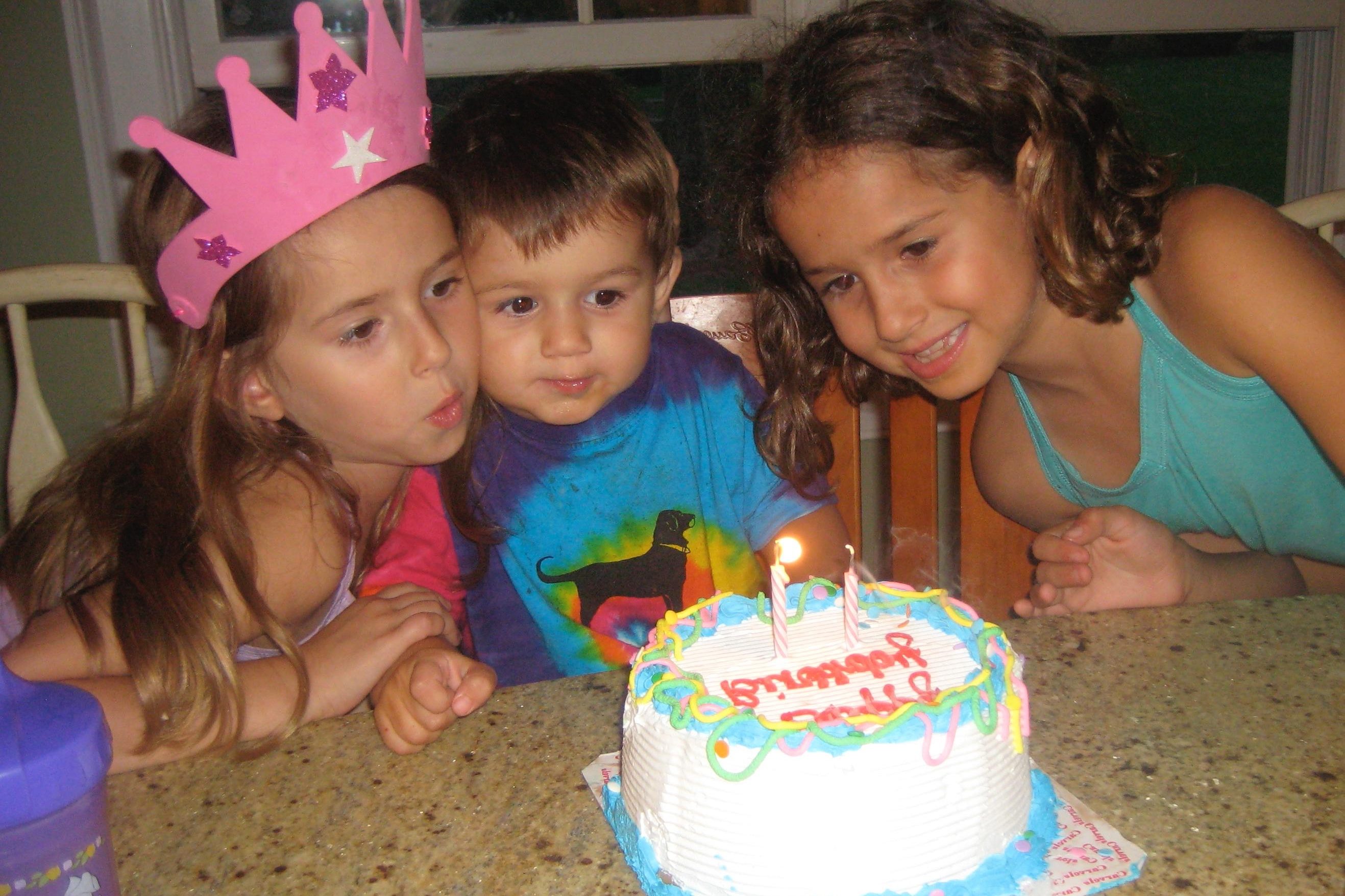 I’m not a big fan of giving or getting parenting advice. You get to screw up your kids. I get to screw up mine. All well-meaning advice by burnt out parents should be ignored. But, seriously, don’t celebrate your kid’s half birthday. You know why? Because you think it’s cute that one time but then ever year, on a random date, that means nothing to no one, that kid is like, “It’s my half birthday” to which you will want to reply, “There’s no such thing. Who told you such a ridiculous thing” to which they will say, “You.”

But that’s the classic mistake of early parenting…being overzealous. And, by mistake, I mean the impossible to avoid momentary loss of sanity for the sake of making your kid’s childhood magical. There are worse things. But, I’m telling you, you will pay for it because kids forget nothing and whatever nonsense you invent before you are completely exhausted will have to be followed through until the very end of time. Like in the throes of the apocalypse in the Thunderdome your kid will be like, “Hey, it’s my half birthday” and you’ll be like, “Are you fucking kidding me? Duck, here comes a spiked spear at your head.”

It’s like the tooth fairy. Right? You know where I’m going with this already because who among us hasn’t invented some cockamamie unsustainable story about a fairy that collects teeth and leaves behind treasures? What, in the name of all that’s holy, is wrong with parents??? You want to know what our tooth fairy thing is? You get a dollar, reasonable, but then you also get a gold coin dollar, because that’s magical right, but completely, 100% impossible to do over the collective 60 damn teeth that will fall from our children’s mouths.

It all started because the credit card reader at the train parking lot was broken and when I feed in a twenty-dollar bill, I got 15 gold dollar coins back, because that’s reasonable. Well, we were flush with gold coins and drunk on the notion that it would be magical to get one from the tooth fairy, never imaging a day I would run out of gold coins long before they ran out of teeth. Look, I’m not proud of this, but I did what I had to do, I just kept taking their old coins and regiving them. I’m just a person trying to get to some sleep and somehow remember to leave the stupid money under the pillow. And why under the pillow? Why isn’t my tooth fairy tradition a check made out to “Cash” that you put on a tooth fairy pillow that hangs on the outside of their door?

But, there’s no way as a parent to see down that road. One year my kid wrote a note to the tooth fairy. Delightful, right? I was blinded by the enchantment and made one of the worst parenting mistakes ever… Yup. I wrote back. But I didn’t just write back. Oh, now.  I, and I’m not even making this up, created a special fairy, curvy script that I wrote in a spiral. Let me repeat that. I wrote the note in a spiral. And… I gave the fairy a name. Seraphina, Selenian, Sephora…who knows? I never thought I’d have to remember it. I never imagined that for years it would be two in the morning and instead of sleeping in my warm bed I’d be concocting fairy adventures to share in my nifty pixie script, learning to sign it just messy enough that she’d not know I didn’t know the actual fairy name. Fie you, Sera-whatever-your-name-is!

I think maybe parents are high on this idea that we get to invent a parallel reality for our kids, be the master of our own myths. We are our own gods writing our version of Genesis…In the beginning Santa wraps gifts only in candy cane striped wrapping paper. Yeah, I really cornered myself there. Once I met someone who told me Santa doesn’t wrap their kids’ gifts. What??? How is that even an option? I think of her at midnight every Christmas Eve when I’m picking up the scraps of the sacred Santa wrap to throw away in order to preserve the carefully crafted illusion of my own design. And don’t get me started on the script I created for Santa. I’m a one-woman graphic design font shop over here!

Oh, and, whatever you do, don’t be tempted to create a backstory for your Elf on a Shelf. Oh, I know you will. You probably already did. Because no matter how hard you resist getting sucked into this vortex, one morning you’ll find yourself narrating Tommy’s secret life at the North Pole like the liar you are and it will get out of hand, so, so, so out of hand. You will remember none of it, but your kid will remember every word. You’ll be challenged and backed in a corner with no other recourse but to lie more to cover the other lies. The only good thing that will come out of this is that you’ll realize you’re a terrible liar, it’s flipping exhausting, and when you are tempted to start that second family in Kansas you’ll think twice.

Ah, it’s all really ridiculous, right? And yet, I kind of love it all! That’s the real reason that you should never take parenting advice. You only gain parenting wisdom through experience. Sure you gain the wisdom of the unsustainable traps you’ve set for yourself, but you also gain the wisdom that it’s all completely worth it. Maybe not at 2am when you are writing to your fairy pen pal for life, but eventually. Because if you aren’t completely intoxicated by the glimmer of wonder in your child’s eyes when they read a note written in a teeny tiny spiral script from some sort of S-named fairy, there’s something wrong with you.

Maybe the only advice we should ever offer other parents is you’re not alone. We are all suckers for the preposterously impracticable fanciful lies that make our kids marvel at the possibilities of the imagination that make childhood so magical. And, although tough to imagine in the throes of it, at some point it ends. Let’s just hope not with the spiked spear hurling at the two of you in the Thunderdome on your kid’s half birthday. You know you’ll still be expected to have everyone pause and sing a quick Happy Birthday.

"Don’t Celebrate Your Kid’s Half Birthday, And Other Valuable Parenting Advice You Should Ignore": https://www.mblazoned.com/dont-celebrate-your-kids-half-birthday-and-other-valuable-parenting-advice-you-should-ignore/