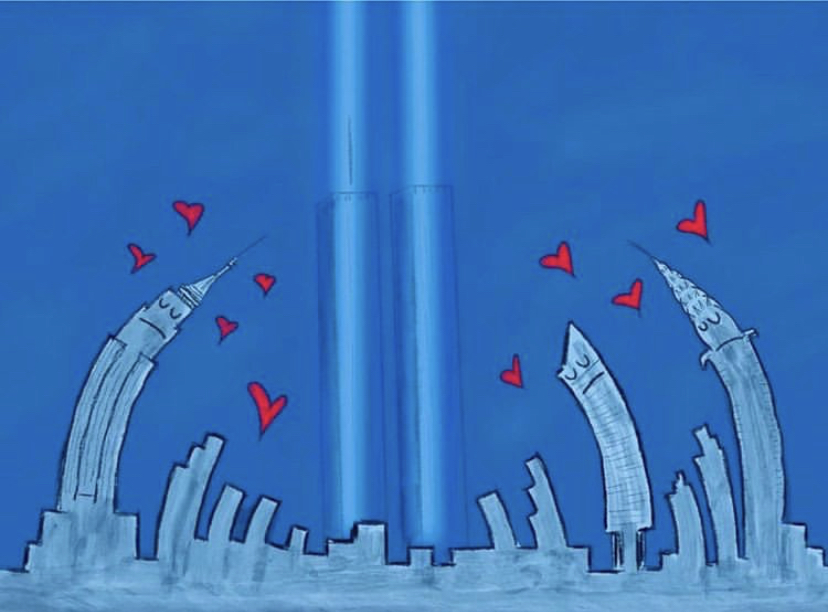 It seems impossible that 9/11 was 18 years ago. I readily know the amount of years because my daughter celebrated her first birthday a couple weeks after. I remember at her party how we were all so shocked and afraid for the future, while simultaneously trying to be positive about the life ahead of this sweet one-year-old baby girl.

I worked in NYC at this time, but midtown. And, I wasn’t in the city this fateful morning. My New Jersey town was full of downtown commuters and we lost residents in double digits. It hit our community hard. There were many funerals. I could never reconcile the collective suffering of those who lost their lives in the same instant. I could never fully comprehend the magnitude of grief it set off for so many families and friends. I still can’t.

When we had no choice but to push onward and get back to life and work, I remember how scary it was to take the train into Penn Station. It felt like a target. It was, I’m sure. In the mornings, I’d rush out of the platform and away from the station as quickly as possible. At night, when the train would finally pull away from the station, I’d breathe a sigh of relief. Life was forever changed.

I remember the military presence in the station, unabashedly brandishing their machine guns. On high alert. The only time I had seen that before was in Caracas, Venezuela on a college sponsored trip. I smugly thought that seemed so sad and terrifying that things were so unstable in their country that the military roamed the streets with automatic rifles slung casually on their shoulders. Surely that was something I’d never see in America.

I was wrong about a lot of what I thought about America before 9/11. That day was the end of my foolish innocence of my country. I grew up in a relatively peaceful time. It was post-Vietnam, post-Nixon, and the country seemed like it was moving forward, learning from it’s troubled past of warmongering, gender discrimination, racism, corruption in the White House. I earnestly thought we were on a steady course of continuing to form a more perfect union.

The last 18 years have eroded so many illusions I had about my country. The last few years especially so. I thought America was immune from foreign attack. Immune from terrorism, especially domestic terrorism. Surely we would never radicalize our own with religion and hate. I thought you’d never see military with massive weapons in public areas, let alone citizens carrying machine guns around town. I thought we were immune from waging war and invading countries. I thought we would never have widespread government corruption…like those other nations.

I believed we were different. That we had figured out democracy, and that nothing would ever impede the foundation of our freedom…free and fair elections. I thought politicians, on all sides, while disagreeing, had our citizens’ best interests at heart. I thought we would never ever backtrack on growing race and gender equality. That, while those issues were not solved, we were not going to wear white robes or demonize women for wanting the same rights and access to power men enjoyed.

God, I was so wrong.

When 9/11 happened, I was 31, a young mother of one child. I was old enough to know better. That America, while advanced in so many ways, is just as susceptible to corruption, violence, and weaponized hate as any other country. But, I didn’t. I honestly didn’t.

Before 9/11, I didn’t know you could go to work one morning in America and be a victim of a foreign attack by terrorists. I didn’t know you could be shot to death at school, even in the first grade. I didn’t know that domestic terrorism would become a regular occurrence that is excused and excused and no one is accountable for the radicalization of these American terrorists. I thought all these years later, we’d be more evolved and working toward the promise of America we all deserve, because it’s our nation and we the people decide.

I think a lot about the people, like you and me, who died that morning at work….or taking a flight…just living their humdrum lives in a country that was still so innocent. And I want America to honor them by being better, by being the beacon it once was to the world of freedom, equality, and justice for all. Maybe it can. For the sake of my now almost 19 year old baby girl, I hope so.

Post Views: 3,545
← The Week Before Family VacationThe Audacity of Forgiveness →